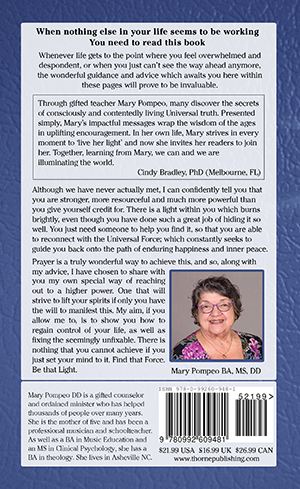 Born and raised in Eire Pennsylvania USA, from the very outset of her arrival on this planet, Mary grew up experiencing contrast first-hand. From enduring the depths of the sometimes interminable months of winter snow, to spending the hot summer's days on the beaches of Lake Erie, she developed a long and enduring fascination for the unique beauty of the seasons. Not only that, but it proved to be the start of a timeless captivation with the mysterious power and processes of Nature itself. Without doubt, this served to influence her lifelong affinity for pursuing a remarkable relationship with the creator of all things; or the Divine Creative Force, as she prefers to call it.

Also having a strong home-life background which revolved around the Catholic church, where visiting priests would actually stay with her family for many weeks at a time, Mary learned a great deal about religion, rituals and the power of prayer. Through attending Mass, and studying the Bible, along with other forms of religious material, she soon discovered a special kind of understanding; which transcended anything that could be gleaned purely from the written word.

Even as young as she was at that time, her innate inclination was to share what she'd accumulated an incrementally evolving appreciation of, with whoever would listen. This was to serve as a formative spur, the spark of a flame which would grow ever brighter, for her to follow a lifetime path of a passion for being a teacher. A calling that has given her a huge amount of satisfaction, joy and pleasure over the years; not to mention the countless people who she has met in the course of sharing her knowledge and gifts with them.

Having been privileged to attend the exclusive Villa Maria Academy for Young Ladies in Erie, Mary subsequently went on to pursue higher education at Mercyhurst University in Erie. While there, she undertook a double major and gained a BA in theology plus a BA in music education. This latter degree, qualified her to teach music and band at senior school, which gave her not only a great deal of enjoyment, but also a similar measure of rewarding satisfaction.

This same period corresponded to the discovering of her love for playing the cello, and then eventually studying at the Chautauqua Institute in New York to perfect her skills. Not being one to hide her light under a bushel, Mary began singing with an eleven piece dance band, playing Glenn Miller style music, where it proved to be a time of being completely immersed in the creative arts. It also served to confirm her love of sharing her talent for performance, while entertaining and brightening the lives of countless people.

Needless to say, music was, at that time her life, responsible for providing a very important backdrop to the shaping how she viewed the world and the people in it. Added to this, because of her cello skills being honed through also performing with a concert orchestra, her social horizons broadened considerably. In this way, Mary naturally encountered a wide variety or musical arenas, while also experiencing and perfecting her ability to lift the spirits of just a single individual, or a large crowd. That aspect of her personality has continued on to be an inseparable and irrepressible part of her, and will never be diminished in any shape or form. It's very much who she is.

As a kind of bi-product to all of this, Mary gradually came to realise her enduring interest for studying people, their characters and behaviour. Through doing so, and when the time was right, she decided to take it to another level. Studying for her MA at Gannon University Erie PA, while specialising in a particularly demanding branch of psychiatry, she eventually qualified in this. As a consequence, this led on to her developing a career as a talented counselor. With her gift of her confident, positive personality and love of life in general, Mary has spent the latter part of her career helping a great many people over the years.

After having moved her family to Florida in the early 1980s, this aspect of her life became ever more important while finding herself as a single parent; especially in regards to having five very active children to raise. This hectic period of juggling her own schedules, life choices and dramas, while advising and guiding her clients on their own issues, provided a wealth of experience to draw on for finally turning to writing. In this way her intention is to reach ever more people, while passing on her wisdom and advice. 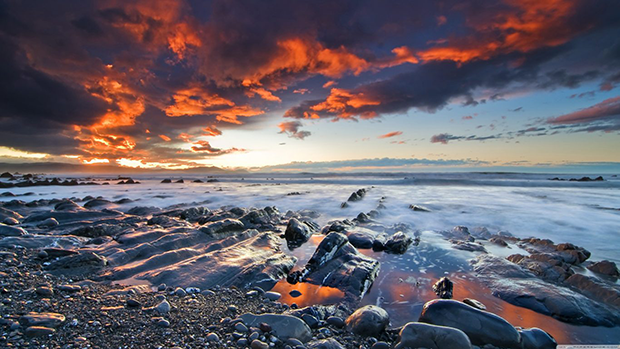 'There is nothing whatsoever that is going on in your life right now which is seemingly so terrible that prayer cannot make it better. Life can oftentimes seem harsh and grossly unfair, where the challenges which come from being this way can, on occasions, feel completely overwhelming. The act of praying takes on those challenges and infuses them with Divine Creative Energy; the very same energy that made our Universe and which continues to power our sun, so as to bring the vibrancy of life and brightness to everything.'

Mary Pompeo - from Find the Force, Be the Light 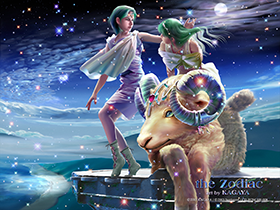 Women ruled by the sign of Aries possess an impeccable sense of style. Yet, despite all this elegance, they remain children at heart. Although they’re independent and outgoing, they can be surprisingly naïve and trusting. This openness often leads to disappointment, but the Aries woman quickly bounces back. This planet is her magic place, and she makes the most of her time on it. She’s not a person that “talks a good game,” she actually “walks the walk.” Expect this fiery woman to be impulsive, forceful and dynamic — with lots of drama thrown in for good measure.

The Aries will stride into places where no one else dares to go, put on their candid persona and ‘ram’ right through a problem. Aries does not suffer avoidance - just get to the point and get on with things.

Some people in this Zodiac animal’s circle see Aries as impulsive, and an Aries could do well to at least consider their view. It may be that sometimes stopping and planning a little bit could keep them from unpleasant disputes. When you have an Aries in your life, you’re dealing with the ruling planet of Mars, who was a war God. So your ram won’t be able to sit still in the face of conflict or obstacles.

The Ram won’t always make ‘war’, but they are not the ones to do the flower-power, peace T-shirts either. The key lesson in life for most Aries is now to take that bundle of power and find ways to apply it mindfully and clearly, without muddled spontaneous reactions.

Elementally, Aries comes under the dominion of fire. This also adds to the Ram’s energy reserves, but also creates a highly unpredictable environment. Aries can be warm and bright, or a raging fire-storm. Thankfully, those who follow Aries into conflict, also discover that they know how to survive, and have no hesitancy lending those skills to difficult scenarios, provided the followers listen to the Ram’s lead.

• Singing with a band