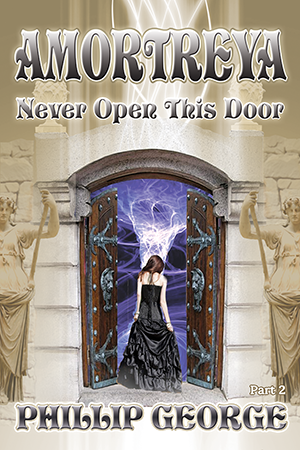 Continuing the developing story of the various dramas at Villa Santa Maria de Cordoba boarding school for girls in western Pennsylvania, Part 2 sees the effects spreading not only throughout the whole school, but also into the nearby town as well. Panic in many quarters seems to bubble away just underneath the surface, while threatening to erupt at any moment. As more and more people find themselves being unexpectedly drawn into the after-effects produced by the nighttime chaos in the forbidden area of the old convent, staff and students alike are faced with all manner of bizarre problems.

Added to this, long-kept secrets are in danger of being revealed as Marianne's alarmingly disruptive influence, along with an apparently coincidental break-in to the old scriptorium, causes a major upset; especially to a highly select and cunningly treacherous group, who have cleverly hidden themselves in the shadows for a very long time. With the risk of their exposure now seeming to be an imminent threat, hurried investigations have been forced to take place, where the identities of the various perpetrators are urgently sought. However, in one case, their initial rashly conceived sorceress probings actually reveal much more than is anticipated, where unforeseen truths become known; and from an unexpected source.

As all of this covert drama is unfolding, Marianne and Kelsey are busy watching much of what's happening at a trendy cafe in the nearby town. Bruni Cafe Ole is a favourite hang-out among the senior students, mainly because it offers good food, a vibrant social scene and live entertainment. While there, the girls meet up with a local band and one of its members who immediately arouses their female interests in a very noticeable way. Being completely unaware of how much this particular location is strongly connected to the school, their emotional predicament, overall confusion and strange encounters quickly deepen.

Whatever had been the cause of the problems at the disastrous séance, Marianne gradually begins to suspect that it has an uncanny reach and sphere of influence. Her suspicions are aroused through meeting up with a highly unusual lady customer, who furtively gives her a somewhat cryptic but grave warning. At the same time, she also offers to help, before hastily leaving; but without giving her name. On first impressions, she comes across as just being crazy, but the more that Marianne recalls what she's been told, it seems that the lady knows what's going on at the school; and could possibly answer the troubling questions she has about what went so wrong in the forbidden room. So she is determined to find out more.

At the same time as this is happening, the lone intruder who is responsible for the break-in, makes his way through the hidden underground tunnel system; in an attempt to escape with something of value to his own secretive group. His pursuit and eventual struggle also lead him to encounters which challenge his resolve and skills, while his fate hangs in the balance. Never before that time has he needed to confront such witchcraft, or ever expected to have formed an alliance with something so unthinkable.

Beset by innumerable troubling dilemmas, and while attempting to keep a cool and level head, principal Garderville visits the schools infirmary. Everything seems to be going from bad to worse in her world, where staff and pupils alike occupy the beds. Being determined to keep any negative news away from sensitive parental ears, she struggles to cope. With one of her senior students being found earlier that morning in the laundry room, while reportedly lying in a pool of blood, she does her best to calm the situation; all the time trying hard to understand what's happening in her once well-ordered school. It appears as though things couldn't get much trickier to deal with, but her day has yet more challenges in store for her as well.

To purchase directly from us, please use the Paypal button. You can securely use your credit card in the normal way.

Please use this link if you wish to purchase for either a bookstore, library or other book trade enterprise.

Use this link to go to the eBook version so as to see the options for suppliers and eReader format. Nook, Kobo, Kindle etc.

Use this link to go to the audio book version so as to see the options for suppliers.