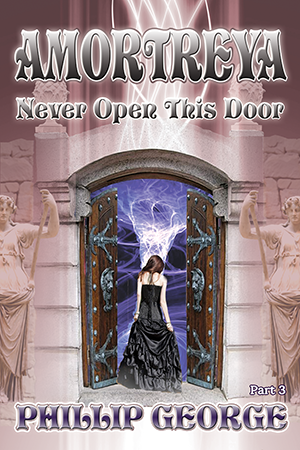 This concluding part of Book 1 sees the continuing ripples, from all of Friday night's craziness, causing more unforeseen and unusual consequences. While Marianne sets out on her own journey through the town, so as to track down the strange lady who gave her the whispered warning in Bruni Cafe Ole, she finds herself getting involved with the object of her affections. He seems to return her interest, but in keeping with everything else that's happened on that fateful day, nothing goes smoothly for her at all.

In the school's underground labyrinth of secret tunnels, the escaping intruder battles on with his quest for freedom. No one knows of his predicament and so there is no possibility of a rescue from the clutches of something beyond his capabilities to deal with. His new found ally seems to be his only hope, but even this looks unlikely to save him.

Meanwhile, another capable and resourceful individual, who is currently head of the school's security, also finds himself in a tricky dilemma. Dev Ness happens to meet up with two male foreign visitors who arrive unannounced and with evidently devious intentions. Having his suspicions aroused right from the start, Dev gets into an altercation after he too has received a secret warning message.

With this surprisingly violent event having made a marked impression on not only himself, but also the female member of staff who was with him at the time, he sets out on his own investigation. Dev is a force to be reckoned with and not one to shrink in the face of danger, but there is also another agenda at work in the part that he has to play. Nevertheless, his determination and skills will lead him to a place where he will be forced to seek help from someone who he has no idea is so connected to a completely different world.

The final part of Book 1 tells of an experience in the Silent forest. Something which happened even before the old convent had been constructed on the land. The nearby area had once been inhabited by the still existing native America tribe, whose elders retained special knowledge about a 'sacred' place which they greatly revered. No one would openly speak of the strange dwelling in the heart of the woods, but over the course of many generations, several brave shaman had actually made trips to it. Their return saw them as being changed men, but as legend has it, two didn't come back at all.

These men were said to have cheated death by purposely walking into the Elysian hunting grounds which awaits the passing of all life, but there was another reason altogether. The structure at the heart of the woods had been there for much longer than anyone could possibly imagine, and for all of that time it had been occupied. In truth, as would be discovered by certain individuals, much more than just the remains of the old convent had been incorporated into the new school. It had a purpose, as would be revealed quite dramatically in the not too distant future.

To purchase directly from us, please use the Paypal button. You can securely use your credit card in the normal way.

Use this link to go to the eBook version so as to see the options for suppliers and eReader format. Nook, Kobo, Kindle etc.

Use this link to go to the audio book version so as to see the options for suppliers.